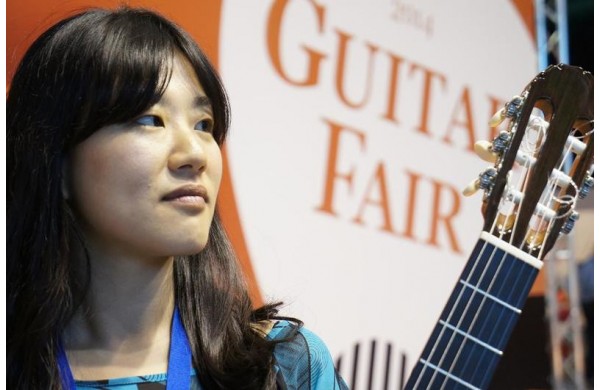 Yunah Park began her guitar training at the age of 16 in her country (South Korea).  She obtained a Graduate in Classical Guitar in University of Korea and afterwards she decided to complete her musical formation in Alicante (Spain) in the Conservatorio Superior “Oscar Esplá” under the guide of Nacho Rodes.
In Madrid, Yunah Park begun her relation with guitar building as the unique apprentice of the Spanish  Maestro, Ángel Benito Aguado (a much well respected master luthier)  After a period of studentship (repairing instruments, designing plans and guitar drawings, historical study of ancient Spanish guitar systems of construction, etc.) Yunah Park built her first instrument, with the guide of her Maestro, based in the most traditional Spanish guitar style.
In her instruments, Yunah Park tries to combine the sweetness of the traditional Spanish romantic sound, the fingerboard easiness, the bass deepness and the brightness and flexibility of the high register singing. Her fidelity to this original sound is not a limit for her to continue developing her search of new improvements to permit the guitarist to find the deepest expression of their music.
Her instruments are always built with the best woods, selected with special attention to its aesthetic, elastic and mainly sound qualities.
All detail on her concert guitars is handcrafted and personally elaborated by her.
Yunah Park is also an accomplished virtuoso on piano and violin, as well as classical guitar.